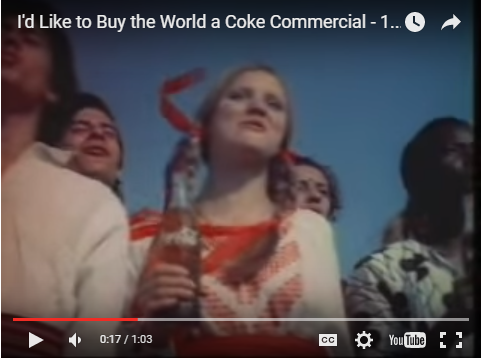 Remember this Coca-Cola commercial from the 70s?

Known as “one of the best-loved and most influential ads in TV history,” this iconic 1971 Coca-Cola commercial is the brain child of creative director on the Coca-Cola account for McCann-Erickson, Bill Backer, who worked together with two British song writers, Roger Greenway and Roger Cook, in creating the jingle “Buy the World a Coke.”

The idea came up while Backer was stuck in Shannon Airport in Ireland due to a forced layover. After hot tempers flared, he later saw a group of passengers talking and joking over bottles of Coke.

“In that moment, I saw a bottle of Coke in a whole new light. I began to see a bottle of Coca-Cola as more than a drink that refreshed a hundred million people a day in almost every corner of the globe. So I began to see the familiar words, ‘Let’s have a Coke,’ as more than an invitation to pause for refreshment. They were actually a subtle way of saying, ‘Let’s keep each other company for a little while.’ And I knew they were being said all over the world as I sat there in Ireland. So that was the basic idea: to see Coke not as it was originally designed to be—a liquid refresher—but as a tiny bit of commonality between all peoples, a universally liked formula that would help to keep them company for a few minutes,” Backer recalled.

Soon after the airport incident, Backer, Greenway, and Cook together with producer Billy Davis wrote and recorded the jingle with the New Seekers. Unfortunately, the radio jingle flopped as the public paid no attention to it.

Although coke bottlers refused to buy airtime for the ad, Backer persuaded the creative agency to convince Coca-Cola to give the ad a chance. He believed that if a visual dimension was added to it, it could make an impact. Coca-Cola eventually gave $250,000 worth of funds for the shoot, a significantly huge budget for a commercial at that time.

Backer put his creative team back to work and recorded the commercial I’d Like to Buy the World a Coke. Sung by a large group of non-conformists on a hilltop, the commercial was a bold move from Coca-Cola as they risked losing a large portion of their market share. If you recall, at the time there were many negative views of non-conformists and it really could have rocked the boat. Instead of casting the usual American icon—white, blonde hair, blue eyes, maybe even a soldier who just came home from war—the commercial showed a diverse group of young men and women who represented the Hippie Movement, which was not widely accepted during a time when patriotism was “in” and the Charles Manson murders news was at its height

That risk, however, paid off because instead of being despised, the commercial instantly hit it off as it sparked feelings of hope and unity among majority of the American people.

The I’d Like to Buy the World a Coke commercial became a reference to marketers across the world and showed the importance of not just knowing who the market is, but actually feeling what the market feels. Indeed, Coca-Cola risked losing a huge part of the American market BUT because of this bold move, many are Coke drinkers today.

A successful marketing campaign, indeed, is all about creating strong connections among the brand, the message, and the market. However, making sure all this will coincide is not an easy task. Just like what Coca-Cola did back in 1971, hiring a creative agency to help you promote your company’s message could make a huge impact on your marketing campaign.

Take your marketing to the next level! Contact BottomLine Marketing at 403-464-7559.