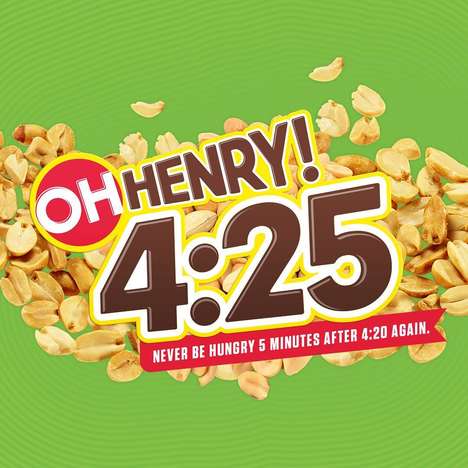 Canada has made history (once again!) by becoming the second country – and first G7 Nation – to legalize marijuana.

This historic bill passed 52-29 in the Senate, paving the way for existing businesses and new competitors to position themselves in the new, nationwide recreational marijuana market.

While many new businesses, such as grow operations and dispensaries are created in this newly legal industry, existing businesses would be smart to leverage this new market. Oh Henry! has done just that. Ignoring those looking to capitalize on creating edibles (consumable marijuana products), Oh Henry! created a new candy bar aimed at eliminating the munchies – one of the side effects of consuming marijuana is an increased appetite. The new 425 bar features more protein to fill you up, and increased salt content; a recipe change from the original candy bar.

Starting with a pop-up in Kensington Market in Toronto, Oh Henry! has launched its 4:25 bar. The pop-up emulated a dispensary with white lab coat wearing employees sharing samples from glass jars. Even the chosen neighbourhood to launch this pop-up is well thought out. Kensington is known as a marijuana-friendly community, having one of Canada’s few weed-friendly cafes, The Hotbox Café.

We ran a poll on our LinkedIn page asking if Oh Henry! is smart to cash in on the marijuana market, or if they’ve taken things too far. Curious to see the response and share your thoughts? You can weigh in with your thoughts here. We’ll be sharing the findings from the poll and dissecting the brand positioning behind this big brand’s play on the legalization of cannabis.

With so many regulations in place for advertisers in the cannabis market, complementary products and services will be much easier to advertise towards marijuana users. Cannabis firms cannot advertise to young people at all, and have to follow strict rules, but Oh Henry! doesn’t have to worry about that. Perhaps the laws will change for all advertisers as more and more businesses look to get in on this opportunity of a lifetime. But for now, Oh Henry! can enjoy their green (cash) while those eating their non-edible edible enjoy their green (marijuana) too.