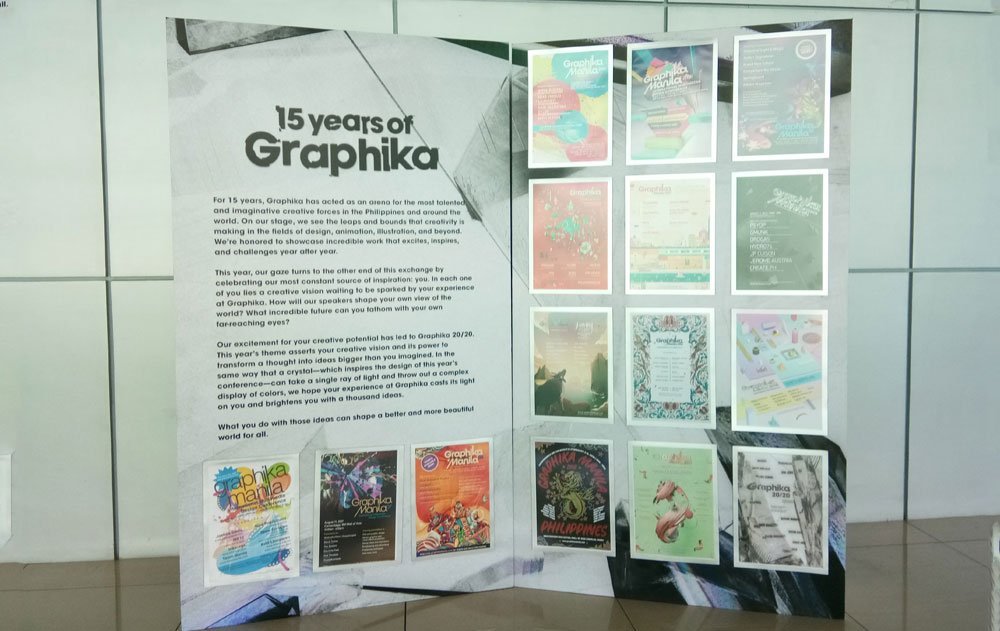 One of the best parts of having a global team is being able to learn from the conferences and opportunities that our colleagues attend around the world.

Kissel Cabladya from our design team and currently based in Davao City travelled to Manilla to take in Graphika Manila 2020, a design festival and conference currently in its 15th year. We invite you to check out her thoughts and impressions from some of the top graphic design minds in the Philippines and around the world.

Hydra Design Group is the company who was assigned for the overall design of the Graphika Manila event. They explained the process on how they came up with the design idea and how they implement it.

I found how they work on or “attack” projects particularly fascinating and inspiring.

So HDG is actually a group of design studios that merged into one. Each of these studios handle projects such as branding, product design, space design, 3d animation etc. When new work comes into their collective, they attack projects in one of the following patterns:

Hydra’s overall efforts and strategies were really appreciated in the overall branding efforts that they put into the event, from the stage design, the ads, the social media posts, to the smallest of details like their transparent bags for the kit, and the lighting that imitates the reflection of crystals, which was the theme of this year’s event.

I’ve been a fan of Kim Jung for as long as I can remember and I very much looked forward to his presentation. Originally from South Korea, he illustrates very detailed and unique illustrations quickly, as most of his works were from his memories with an imaginative twist. He likes to demonstrate his drawing skills during his talks and would share stories from his past while illustrating. Through his drawings he shared how he started illustrating, how he struggled as an artist and what his life was like before he became well known. He also explained what his process is and how a cube can make a huge difference in

Kim Jung Gi told us that he pictures the full image in his mind before he could even touch the pencil into the paper. That way, he makes fewer mistakes.

le who have lost interest/passion in their work:

“Don’t have the feeling of being rushed to be successful, specialize more on your interest and happiness, you will reach a point where you don’t rush yourself and enjoy it.”

Wendell was born in Manila but moved to the U.S. when he was young, getting hired at Sony Pictures animation right after he graduated in college, working on projects like Smurfs Lost Village, The Emoji Movie, Spiderman into the Spiderverse and some smaller projects like Spider-ham.

His presentation focused around visual development. His take on visual development is that it is the space where artists create characters and environments, visual storytelling, using visual communication skills, using lights, colors, which helps tell stories/ give visual cues on what the director is trying to say.

During his character studies for “girl smurfs” he said he would get inspirations from his real life group of girl friends, and what they do on a daily basis. From that he would illustrate characters of female smurfs who go to yoga, go to coffee shops etc.

His tip for the creatives:

Method studios is a CGI/VFX company, based in many parts of the world. They have worked with lots of big brands, such as Mountain Dew, Microsoft, And movies like Jumanji, Godzilla and Men in black, John Wick III, etc. What drew my interest about him was where he mentioned that his company follows a certain belief of being “media agnostic”, meaning that they don’t approach projects using specific tools or mediums and instead use “lots of discipline” to solve the project.

Robert has done a LOT of design work all over the Philippines. He calls himself a “yes man” in terms of art and that he doesn’t limit himself from being just a graphic designer. His works range from giving art lessons to kids who were victims of abuse or calamities, space designing to buildings, malls and booths, mural art, “accide

ntally” becoming a TV host of a popular art show program back in the 90’s, becoming a graphic design and eventually a CEO of a paper craft company (Papemelroti), designing dolls, and owning a business that encourages kids to be creative.

His talk tackled his personal experience as an artist, and how his life is very intertwined with his work. The best part of his talk is when we mentioned about him not being able to love himself his whole life and that resulted in him getting sick and eventually having cancer, and how that changed his perspective in life. With that he encourages every artist in the room to not pressure themselves with work, and you don’t have to struggle to be someone else in the business. Just be yourself. No pressure. “Let your life be your greatest design masterpiece”.

He also said he doesn’t seek clients anymore, that it just naturally lands in front of him, saying “A good job will give you the next job”.

Vincent is the guy behind the hyper detailed posters from some of the big Marvel movies and other big screen films here in PH. He talked about his design process, starting with an image and using it for tracing, from that he does the coloring and adding highlights and midtones and then adding the small details. His advice was “don’t wait to initiate”, and he believes in the saying “creativity is a remix” and repetition is the mother of skill.

Stefan got recognized from social media for his lettering works and now he has thousands of subscribers. He said that he dried out of ideas during art school and felt uninspired, so he decided to become a Swiss banker, where later in life he joined the “100 day creativity challenge” where regardless of the creativity he would post on his Instagram anything that is creative. So he would create easy ones like pressing the paste out of a toothpaste tube and write “smile” or lettering some bible verses. From there, companies started approaching him to license his photos. His message was to keep on creating something even if it sucks, and that social media is the key.

Raxenne is a graphic designer and illustrator from Manila. She is very fond of flora and fauna designs, and focuses on plant life for her personal works. Raxenne uses serious amounts of research to make sure her designs look right, admitting that she even went to very old/unsafe websites just to get information about the details of each flower. She showed us her process on research and how she comes up with the design. One of her quirky ways to get inspiration is by not following artists similar to her, but other artists from different fields instead like photographers and directors.

Futuredeluxe works with a LOT for big brands around the world like the BBC, Coca-Cola, Nike, Converse, and a lot more. FutureDeluxe is an experimental creative studio represented by James Callahan, who told us about generative arts using computers, data, technology to create art.

James offered up some straight talking truths about their agency and how they work with clients including the hilarious “No Dickheads” policy: Don’t employ dickheads, and don’t have dickhead clients!

Stefan focused on the theoretical side of design, things that would make us really think as artists. His talk revolved around his notion that “beauty is NOT in the eye of the beholder”. He mentioned Adolf Loos and some other artists and how they incorrectly defined beauty and unfortunately a lot of artists following them believed that functionality is more important than form.

The term he used is “international style’ and Sagmeister wasn’t afraid to see that he finds this as “complete stupidity”. Case in point is the Bauhaus design, and I’m partial to agree with him, in that form should not follow functionality, neither does functionality follow form. Form and functionality must be treated equally in terms of design and one should never be chosen over the other. Everything should not look alike nor pulled out from a standard template.

One piece of“evidence” he provides is the case of patients with Alzheimer’s disease that continue recognizing beautiful things even if they forget about it after a week or so. “Even if we lose our minds, we can still recognize beauty.”

Thus his conclusion is that “we somewhat agree on what is beautiful (somewhat)” and that
functionality without form doesn’t work. Take form seriously. We Start something with a remix, but build newish things after. In order to unclog the most visited tourist spots in the world, we should build/create more places beautifully, so tourists are equally segregated to appreciate beauty.

If you ever get the opportunity to take in the Graphika conference, by all means do so. The ideas on hand aren’t just focused on drawing, or design, but there are also plenty of concepts around creativity and agency work that are invaluable to anyone involved in the creative process.